Education – past and present…how about the future of it? (Contd. article)

Dear reader, we have finally made it to more recent times when the conceptualization of “education” is concerned…What remained the same in the way of Plutarch’s Ancient Greece, what has changed…or, has anything changed with any significance since? I hope you will stay today and come back for the rest of my article as long as it lasts?!  As usual, you have my best wishes for the rest of your Sunday and for your new week!

EDUCATION AND THE 21ST CENTURY

Einstein’s life and work have been and continue to be objects of concentrated interest to the extent that I prefer to bring to attention some lesser-known facts surrounding the genius about the subject matter. And I will only tend to them through Einstein’s own words – or, as they are commonly attributed to him. The first one of my selection reflects Plutarch’s analysis of Academic philosophy to the core: “Education is not the learning of facts, but the training of the mind to think (“On Education”).” Imagine a speech of this nature meeting a university graduation ceremony in our times. But there is more: “Education is what remains after one has forgotten what one has learned in school.” How about his frequently cited pronouncement: “The only thing that interferes with my learning is my education (“On Education”)”?

In his above-mentioned State University of New York at Albany commencement address, “on the occasion of the celebration of the tercentenary of higher education in America,” Einstein has much more to articulate on the topic of traditional learning impositions forced on students. Only selected excerpts of highest relevance appear here:

Sometimes one sees in the school simply the instrument for transferring a certain maximum quantity of knowledge to the growing generation. But that’s not right. Knowledge is dead; the school, however, serves the living. It should develop in the young individuals those equalities and capabilities which are of value for the welfare of the commonwealth. But that does not mean that individuality should be destroyed and the individual becomes a mere tool of the community, like a bee or an ant. For a community of standardized individuals without personal originality and personal aims would be a poor community without possibilities for development. On the contrary, the aim must be the training of independently thinking and acting individuals, who, however, see in the service of the community their highest life problem (“On Education”).

At this intersection, I would like to reiterate my earlier contemplation on the two essential elements that our times lack in full, a conclusion I had reached through my readings of Plutarch: ‘Love for noble labor and the works of virtue.’ What Einstein illustrates in the latter part of his speech lays the importance on the same values: “[T]he school and the teacher must guard against employing the easy method of creating individual ambition, in order to induce the pupils to diligent work (“On Education”).” That this task is anything but easy, Einstein recognizes and helps others to acknowledge by getting deeper into the issue at hand:

[O]ne should guard against preaching to the young man success in the customary sense as the aim of life. For a successful man is he who receives a great deal from his fellow men, usually incomparably more than corresponds to his service to them. The value of a man, however, should be seen in what he gives and not what he is able to receive.

The most important motive for work in the school and in life is pleasure in work, pleasure in its results, and the knowledge of the value of the result to the community. In the awakening and strengthening of the psychological forces in the young man, I see the most important task given by the school. Such a psychological foundation alone leads to a joyous desire for the highest possessions of men, knowledge and artist-like workmanship (“On Education”).

The seemingly simple yet demanding challenge in teaching for the future of humanity must be understood outside time and space but also against the backlash of teaching aims to deliver ‘special knowledge’:

I want to oppose the idea that the school has to teach directly that special knowledge and those accomplishments which [sic] one has to use later directly in life. The demands of life are much too manifold to let such a specialized training in school appear possible. Apart from that, it seems to me, moreover, objectionable to treat the individual like a dead tool. The school should always have as its aim that the young man leaves it as a harmonious personality, not as a specialist.

In his conceptualization of education, Einstein joins hands with Plutarch and Chesterton, as he also demands from the field a “searchlight” (Chesterton) to be offered to the learners in a delicate balance between their own space and the opportunity to alter themselves into their improved selves:

The development of general ability for independent thinking and judgment should always be placed foremost, not the acquisition of special knowledge. If a person masters the fundamentals of his subject and has learned to think and work independently, he will surely find his way and besides will better be able to adapt himself to progress and changes than the person whose training principally consists in the acquiring the detailed knowledge.

Giving students the chance to advance upon their own character is a concept that also Sydney Justin Harris – a far less-known figure of human history explored and articulated with fierce passion.

Sydney Justin Harris was born in London, England on September 14, 1917. The Harris family is known to have moved to the United States, when he was five and having settled permanently in Chicago around 1922. Harris was attending the University of Chicago as a philosophy student, when he started his newspaper career at the Chicago Herald-Examiner. Like Chesterton’s service as the editor of his own weekly publication, Harris also was in editorial charge, only of his own magazine The Beacon. Other similarities between Chesterton’s and Harris’ professional lives include Harris’ active involvement in drama critiques. He soon became a reporter and feature writer for the Chicago Daily News. For 40 years, beginning with 1944, he published “Strictly Personal,” his daily column in which he married his background in philosophy to his research in the form of essays on a large variety of issues related to the contemporary world, including “human behavior, religion, hypocrisy, and artistic endeavor” and delving into areas of high controversy of his time, such as “supporting abortion, prison reform, and a less literal interpretation of the bible (Newberry.org.).” Next to his journalistic and literary critique work, Harris delivered lectures – another area of life experience bridging him to Plutarch, the perhaps most important connectors being his philosophy studies, commitment to the essay genre and groundbreaking thoughts on education. 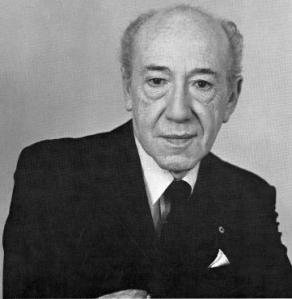 For the context of this article, Harris- 1994 essay, “What True Education Should Do” has critical importance and I will therefore include it here in its full length. In his critique, Harris is citing the Greek philosopher, Socrates (c. 470 BCE – c. 399 BCE) – the core influence on Western thought – whose teachings Plutarch includes in his Moralia as well as in his treatises in apparent support:

When most people think of the word education, they think of a pupil as a sort of animate sausage casing. Into this empty casing, the teachers are supposed to stuff education. But genuine education, as Socrates knew more than two thousand years ago, is not inserting the stuffings of information into a person, but rather eliciting knowledge from him; it is the drawing out of what is in the mind.

“The most important part of education,” once wrote William Ernest Hocking, the distinguished Harvard philosopher, “is this instruction of man in what he has inside of him.”

And, as Edith Hamilton has reminded us, Socrates never said, “I know, learn from me.” He said, rather, “Look into your own selves and find the spark of truth that God has put into every heart and that only you can kindle to a flame.”

In the dialogue called the “Meno,” Socrates takes an ignorant slave boy, without a day of

schooling, and proves to the amazed observers that the boy really “knows” geometry— because the principles and axioms of geometry are already in his mind, waiting to be called out.

So many of the discussions and controversies about the content of education are futile and inconclusive because they are concerned with what should “go into” the student rather than with what should be taken out, and how this can best be done.

The college student who once said to me, after a lecture, “I spend so much time studying

that I don’t have a chance to learn anything” was succinctly expressing his dissatisfaction with the sausage-casing view of education.

He was being so stuffed with miscellaneous facts, with such an indigestible mass of material, that he had no time (and was given no encouragement) to draw on his own resources, to use his own mind for analyzing and synthesizing and evaluation this material.

Education, to have any meaning beyond the purpose of creating well-informed dunces, must elicit from the pupil what is latent in every human being the rules of reason, the inner knowledge of what is proper for men to be and do, the ability to sift evidence and come to conclusions that can generally be agreed to by all open minds and warm hearts.

Pupils are more like oysters than sausages. The job of teaching is not to stuff them and then seal them up, but to help them open and reveal the riches within. There are pearls in each of us, if only we knew how to cultivate them with ardor and persistence (The Thoughtful Reader).

That Harris had seen the necessity of lighting the fire for learning is evident in the following quote attributed to him; one echoing the Academic philosophy of Plutarch’s Ancient Greece:

The whole purpose of education is to turn mirrors into windows.

To enable a young individual with learning that would transcend the mere reception of knowledge, transforming it into a life experience to give others in the form of one’s improved character, while embracing thus empowering all involved in that exchange, was a life objective of the human ideal called Nelson Mandela.

(Next Sunday…Mandela, viewed within the context of education)