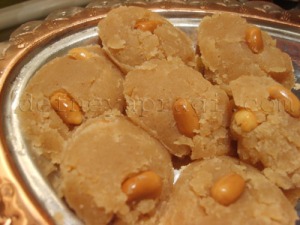 Even after several decades passed since I last smelled it coming from my mom’s kitchen, the aroma of its slightly burned delight feels on the roof of my mouth.  “Just because,” she answered, when I first noticed she was making it outside the expected occasion: death.  The fortieth day of a death close to the family’s heart would warranty it, after which it would be repeated on the anniversary of that passing.  “In remembrance of the loss of our beloved among us, to have the strong whiff reach their souls,” my mother would utter on those occurrences – in a very soft voice, almost inaudible.  But that day, it was “just because.”

I absolutely loved then and love now the taste of un helvası (Turkish spelling), the Flour Halva/Helwa but also was engrossed in its unmistakable aromatic tour throughout our three-bedroom flat.  As I am writing now, my mother’s quick hand gestures stay glued to my mind’s eyes; how she would shape this very slowly fried butter, flour, sugar and milk mixture – something that doesn’t look like much at first – into edible rows of a finger dessert (I made up this term based on the English “finger food”), each topped either with a home-roasted raw almond or a large pine nut.  Her helva-making rituals became a more frequent act after that time.  Only after she died was I able to conclude how making that sweet dish had become her own way to feel connected to our beloved dead.  Through the first connector we experience right after our birth: partaking in the festivities of the palate.

May your Sunday and new week be filled with delectable life experiences, and may you come back to share some of them right here, over an imagined cup of Turkish coffee and a helva of your choice to celebrate a joyous event.

Description of the Different Helva Types